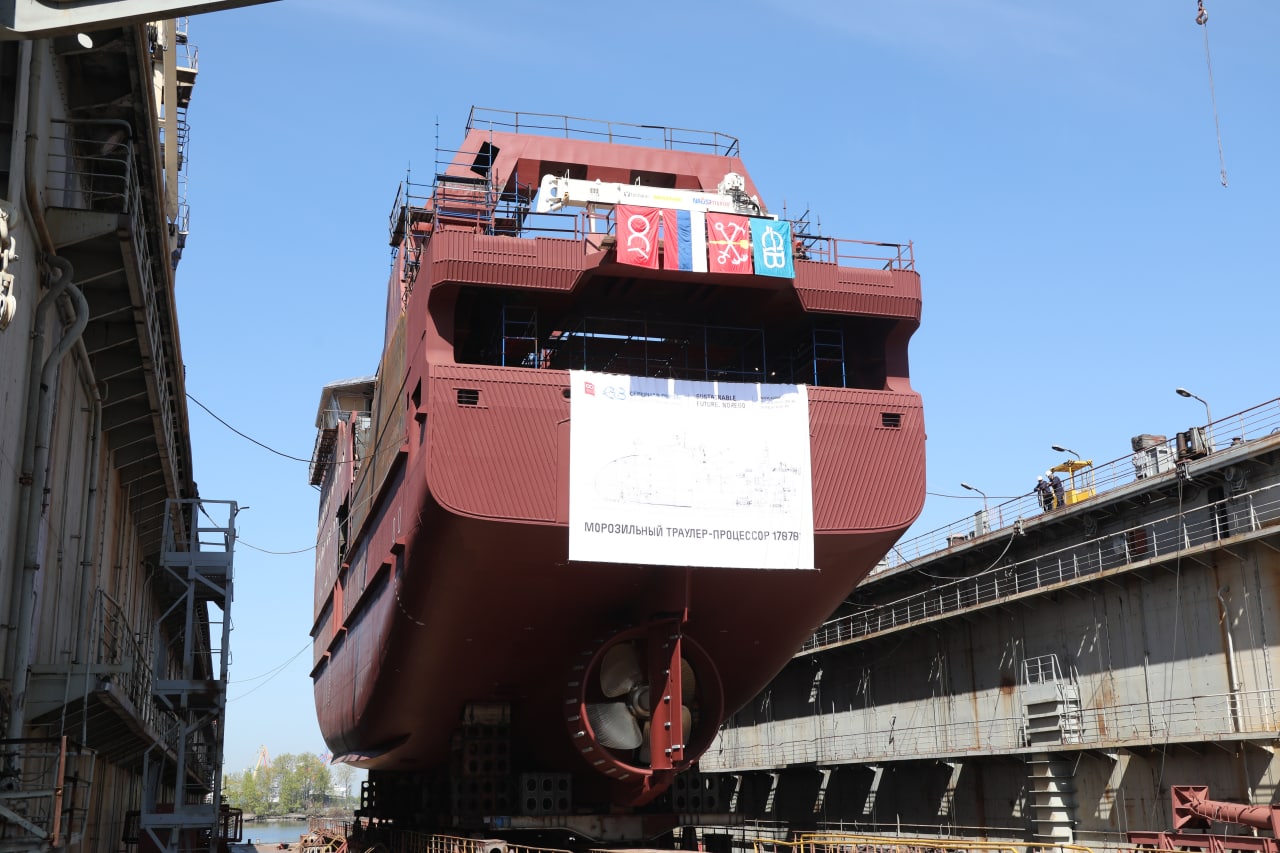 This is the fourth vessel for Norebo Group, which is being built according to project 170701 for fishing activities in the North Atlantic. The delivery of the trawler is scheduled for 2023. After the trawler is launched, outfitting work will continue on it, fish factory erection and cladding of the vessel premises will begin.

A series of distant-water fishing processing-trawler of project 170701, being built by Severnaya Verf for Norebo Holding, consists of ten vessels; six of them will operate in the Northern Basin, and four in the Far Eastern Basin. The design and detailed construction documentation was developed by the domestic designer Nautic Rus. For the first time, a new hull design – a capsule-shaped bow lines with an Enduro Bow type tip – has been used for Russian fishing trawlers. This increases the area of the operating space on board and makes possible to improve seaworthiness.

The processing-trawler Kapitan Breichman is named after the Honored Worker of the Fisheries of the Russian Federation Lev Semenovich Breichman, the captain of the flagship of a group of vessels operating in the southeastern Pacific Ocean, and later the general director and chairman of the board of directors of OAO Murmanrybprom. Lev Breichman was called a heaven-born fisherman for his integrity, professional competence, and excellent organizational skills; his crews always had high catch rates, and he himself was awarded the Badge of Honor Order (1982) for his merits.

The trawler is named after one of the famous captains of the industry, as well as the previous three vessels of the series. The trawlers Kapitan Sokolov, Kapitan Geller and Kapitan Ostashkov have already delivered by the shipyard.

Kapitan Breichman has already become the tenth launched vessel from among those being built under the investment quota program by the FSA member companies. Earlier, four supertrawlers for the Russian Fishery Company, a crab fishing vessel for the Russian Crab Group of companies, three heavy-tonnage and one medium-tonnage trawler for Norebo Group were launched. Several vessels are expected to be commissioned this year.

Stay up to date
Subscribe to Newsletter
Follow us:
Other News
FSA News
FSA has approved a strategy for the development of marine fisheries until 2030
FSA News
New members of FSA
Industry Expertise
Russian crab industry has successfully rebuilt exports
Industry Expertise
FSA assessed the development of digital solutions in the fishing industry
Fleet Renewal
The construction of the fishing fleet opens up new opportunities for the industry
Human Resources
Partnership with business is essential for industry education
Sustainable fisheries
FSA completed certification in all pollock fishing areas
FSA and SOYUZSOTSPIT will start joint work to ensure social nutrition with fish products
Fleet Renewal
Systematic renewal of the Russian fleet is necessary and economically feasible
FSA and the Fish Union signed an agreement on the development of the domestic fish market at the EEF
FSA and FEDC agreed to cooperate in increasing the investment attractiveness of the Far East
FSA News
FSA congratulates the management and staff of the Pacific Crab company on the victory in the Exporter of the Year contest!
Back to News
+7 (495) 787 16 27
info@fsarf.ru
Business Center Millennium House,
12 Trubnaya str., Moscow, Russia,
107045
Our Values
Sustainable Fisheries
Fleet Renewal
Analytics and Research
News
About the Association
Contacts
Stay up to date
Subscribe to Newsletter
Follow us:
© FSA, 2023
All rights reserved
Privacy Policy
Cookie Policy
Sitemap
Developed by ITECH